THE STORM OF THE DECADE | RETAINING WALLS FOR THE NORTHERN BEACHES

When a large low pressure system began to move south along the east coast of Australia, rich in moisture and packing high winds, it was the beginning of a notable event for Sydneysiders. Combined with cool air from the interior, and aided by a coincidental king tide, the storm would become one of the most destructive storms to hit Sydney’s shores in decades – and a stark reminder of the need to assist the land in the Northern Beaches with retaining walls.

In two days, the storm dropped the equivalent of two months’ precipitation. Creeks and rivers began to overflow their banks, and soil became sodden. The high winds, blowing inshore from the northeast, began to topple trees, whose securing roots had become less secure in the muddy soil.

On the coast, erosion problems became acute. The king tide, along with the storm surge, helped enormous waves of up to 14 metres to break closer to shore, washing away lawns, swimming pools, and gardens. Buildings, including the Collaroy Surf Club, endured considerable damage to their lower floors as the flood waters pushed well beyond the high tide mark.

This flood was exceptional, and the damage was notable. Throughout the hills of the Northern Beaches, the importance of protecting your property from erosion with retaining walls has seldom been made more clear. Properly installed, and incorporating adequate drainage, our walls can mitigate the erosive power of heavy rains and breeze, keeping your property intact through the stormy season. 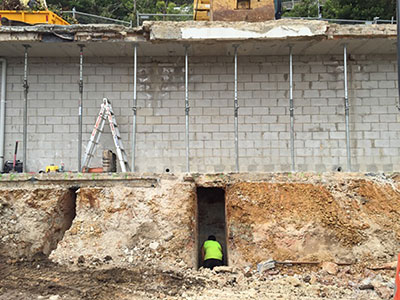